-The structure can be installed on all vehicles with a maximum weight of 3,500 kilograms and up.
-Wit…" /> 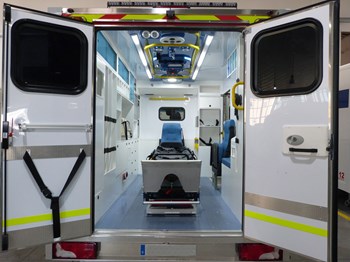 -The structure can be installed on all vehicles with a maximum weight of 3,500 kilograms and up.
-With 33% more space, it facilitates the work of the toilets and increases the capacity of the furniture.
-The new manufacturing process significantly shortens delivery times with a considerable reduction in costs.

Lost Simetry is the only manufacturer approved in Spain for this type of structure that can be mounted on any vehicle, especially Type B and C ambulances.
Conceived under the parameters of safety and functionality, the new Ambu-Box comes to occupy the leading role of what will be the ambulance of the near future, more versatile, lightweight and with the possibility of being installed in any vehicle.

The Ambu Box is the result of the work of the Lost Simetry engineering department, which set itself the challenge of combining two seemingly contradictory concepts: lightness and resistance, as well as obtaining more space to facilitate the work of physicians.

The new Ambu-Box has passed numerous dynamic tests and tests during its design to certify that its lightness does not affect its safety. In addition, the manufacturing process has been fully standardized, which allows a considerable reduction in time and costs.

Today, after multiple tests and improvements, Lost Simetry is the only company in Spain that has the necessary approval for the manufacture of this structure designed to be installed in any type of ambulance, especially Type B and C, currently highly demanded in the market. European.

And this has been possible thanks to an ingenious design based on the mechanical properties of aluminum, which guarantees strength and lightness. Proof of this versatility is the ambulance recently acquired by the Granada City Council, specially designed by Lost Simetry to provide service in a neighborhood with streets as narrow as the Albaicín (1.9 meters).

The Ambu-Box has successfully passed all the dynamic tests and has demonstrated a strength that places it far from the point of collapse. Other ambulance manufacturers launched into the design of a similar structure, but ended up rejecting the idea precisely because they failed to provide the structure with the necessary robustness.

This has not been the case Lost Simetry, aware of the virtues of this model - lightness, spaciousness and versatility - and supported by the company's engineering department, has managed for the first time in Spain to homologate a structure of these characteristics.

“We had to create a structure that met the requirements established by medical transport regulations, mainly the 10G crash test. And we get it. Our engineers carried out various finite element simulations of our structures and subsequently a dynamic test was carried out with a deceleration of 10 G in the 5 directions, as required by the UNE-EN 1789 standard ”, they explain from the company's engineering department.

Having obtained this robust and lightweight structure, Lost Simetry began design work to enable a much larger workspace. “We have increased our plant by almost two square meters, which represents an increase of 33%. This space allowed us to design furniture 2.66 cubic meters larger than that installed in an advanced life support ambulance, which represents an increase of 62% ”, explains Julián Carrión, CEO of Lost Simetry.

"We have achieved a unique vehicle in the national market for its performance, robustness and lightness, which places us at the level of the best European manufacturers", concludes Carrión.