FUTURE, THE REFERENCE AMBULANCE IN THE CANARY ISLANDS 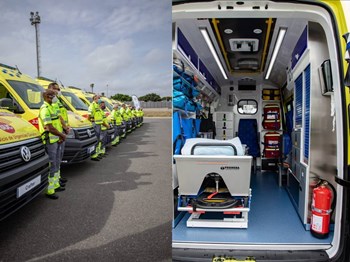 Lost Simetry has delivered throughout the months of November and December 2020 a total of 50 FUTURE emergency medical vehicles for Health Management of the Canary Islands that include a wide range of models that adapt to the needs of the island government in a contracted operation by ISCAN (Gran Canaria) and the ACCIONA-ICOT joint venture (Fuerteventura and Lanzarote).

Specifically, the company has adapted “basic life support” (type B), “advanced life support” (type C), and “collective transport” (type A2) vehicles. All of them will operate on the islands of Lanzarote, Gran Canaria and Fuerteventura with the aim of carrying out all the transport of patients assigned to the Canarian Health Service and in which hundreds of professionals from the health emergency will intervene.

These vehicles have been transformed under the EN-1789 + A2 Standard, developed in the new “Future” concept from Lost Simetry. The main characteristics of this ambulance model are light materials, such as aluminum, ABS, or composites, achieving unprecedented lightness and resistance.

FUTURE, A NEW CONCEPT OF LIGHT, VERSATILE AND SAFE AMBULANCE

The new FUTURE Ambulance was born in 2019 in response to the needs raised not only by the different Spanish health administrations, but also by health workers.

The result is a vehicle with greater safety and functionality that has undergone the most demanding tests to verify the important innovations implemented, such as increased lightness and cooling, as well as the ergonomics of healthcare personnel. FUTURE fully complies with the requirements of the European Union and the EN-1789 + A2 standard.

FUTURE has four different models, such as the ambulance for individual transport (type A1) and collective transport (A2), the emergency ambulance (type B) and the mobile intensive care unit (type C). So far Lost Simetry has manufactured a total of 200 FUTURE ambulances for the national and international market.