AN AMBULANCE IN ALBAICÍN?

AN AMBULANCE IN ALBAICÍN? 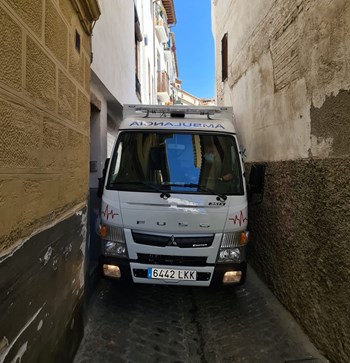 The versatility of Lost Simetry designs does not remain exclusively inside. With the adaptation of the Mitsubishi Fuso Canter, which is only 1.7 meters wide, healthcare quickly arrives through the narrow streets of Granada's Albaicín.

What maximum width must a vehicle have to be able to circulate through the narrow streets of Albaicín? That was the first question posed by the Lost Simetry design team to begin the transformation of a small van into a rescue vehicle capable of circumventing the difficult street network of the most emblematic neighborhood of Granada.

The chosen model was a Mistsubishi Fuso Canter with a width of 1.7 meters, enough to guarantee the work of doctors and physicians and the maximum to be able to reach where until now only the stretchers could. The streets of the Albaicín are approximately 1.9 meters wide.

And this was the challenge that Ambulacias Alhambra-Granada posed to Lost Simetry: an approved ambulance, with the standards approved by the Junta de Andalucía and that at the same time can access all homes in the Albaicín neighborhood.

A challenge for designers

The Lost Simetry team of designers and engineering set to work on the project in order to develop and homologate in record time a vehicle that would meet all the regulatory and quality requirements of a small ambulance. An important challenge because, in addition, no one had been able to give a valid answer until now.

“We had to create a structure that met the requirements established by the medical transport regulations, mainly the 10G crash test. And we get it. Our engineers carried out several finite element simulations of our structures and later we carried out a dynamic test with a deceleration of 10 G in the 5 directions ”, they explain from the company's Creation and Design department.

They then adapted the patient's cabin and the furniture to the required width, while developing the anchoring of the box to the only vehicle that can circulate on the streets of the neighborhood, the Mitsubishi Fuso.

And they succeeded. A fully equipped ambulance with very small dimensions. The vehicle has a maximum height of 2.6 meters, a length of 4.6 meters and, most importantly, a width that does not exceed the measurements of the base vehicle itself, 1.7 meters.

The presentation of the model - along with another 20 standard ambulances - took place last June in an event attended by the president of the Junta de Andalucía, Juanma Moreno, together with the Minister of Health and Families, Jesús Aguirre.

Moreno affirmed that the Lost Simetry model is "perfectly equipped and motorized, thanks to technical ingenuity" and that it is "one more step in the determined commitment of the Andalusian Government to public health, to which is added the economic and human effort that it is being done to face the coronavirus crisis "